My absence has indeed been dictated by my gallivanting, but I don't want you to think I was doing nothing *but* gallivanting. Travel is after all supposed to be educational, broadening the mind and all that. Here are some of the things I learned while away.


1. It doesn't matter how comfortable the shoes are when you try them on in the shop, you must then wear them around the house for several days or you will regret it. Yes, I know, I've learned this lesson before but apparently forgot it or at least thought it wouldn't matter since we were only going a couple of blocks. And back. In hot weather. Ow (for several days).

2. Gay Pride Parades are a lot of fun. This is really one of those self-evident truths which we hold to be etc etc but I have finally seen it for myself. I have actual evidence, to wit this photo: 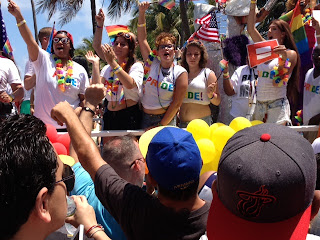 3. When drinking cocktails, it is advisable to attempt to keep count. Especially when other people are just catching the waiter's eye and indicating 'another round' with a simple swirl of the fingertip. An alternative lesson before sitting down with people who do that is to start on lime and soda, but that won't be nearly as much fun.

4. Coffee with an interesting person trumps a lecture on an interesting topic by a bad speaker every time. And sometimes a lecture by a good speaker, though it depends how quickly the coffee goes cold. There's probably a mathematical formula for it.

5. Americans clap at the end of a patriotic film in the cinema. Who are they clapping? Themselves, for having stayed awake for the whole of a film or for being part of such a patriotic nation? We saw Zero Dark Thirty, Lincoln and Argo during our trip (plus Hitchcock, though they didn't clap at the end of that, presumably too many Brits in it) and while I will acknowledge that the tension in places was excellently constructed, leading to a sense of relief despite knowing the actual outcome in my head, it still seemed strange to applaud Affleck et al. But then I have known for a long time than American patriotism is a far more overt beast than British patriotism, which tends to loiter in the corners of self-deprecation.

6. Not all Texans are gun-totin' Bible-quotin' Republicans. As the ship had started in Galveston, there were quite a few Texans on board and yet we had only one really awkward moment at dinner, which wasn't even over the Second Amendment. Our Pennsylvanian companion was critical of the Texan congressman who had complained about Federal relief funding after Hurricane Sandy had swept up the East coast, but who was then very quick to ask for Federal relief funding for those affected by the blast at Waco. I don't know if our Texan companion was related the congressman but boy, did he get upset! We'd already covered the failure to pass the amendment relating to universal background checks, without Texan explosions, so it was actually quite a surprise. I quickly changed the subject...

8. Ginger tea doesn't taste of ginger if it's drunk in the proximity of peppermint tea. It's as if the peppermint has taken the ginger out back somewhere and kicked its gingery little head in. It's entirely possible that ginger tea *never* tastes of ginger, but I haven't taken that risk yet.

9. For all those Scots/Welsh/Irish folks who resent being called English when what was meant was 'British', there's at least one American out there somewhere who thinks that Ukraine and Macedonia are part of Russia.

I probably learnt other things too, but unless I made notes fairly immediately, chances of retaining the information were slim. Here's hoping for more enjoyably-acquired lessons!
Posted by NikkiF at 09:55