The Joy of Jam-Making

Last weekend I made jam for the first time *ever*.

This will doubtless seem to some a shocking revelation, while others will be totally unsurprised. I am, after all, hardly a Domestic Goddess. I have just discovered the new nomenclature of 'outsourcing the catering' when having friends over for dinner (aka getting in a takeaway, preferably one that is delivered). But the lady round the corner had phoned in desperation: could I take some plums off her hands, as her trees had gone into overdrive. I'm not the world's biggest plum fan, having endured a surfeit of them as a child, but I had seen a recipe for plum clafoutis that looked quite straightforward and was marked 'easy' in the margin. Yes, I said, I can take a few.

My next mistake was letting the OH go round to collect them. He, of course, did not endure a surfeit of plums as a child and was therefore not shocked when the plum-grower filled a carrier bag (admittedly, a small one) for him with a fraction of her produce.

I shouldn't be eating puddings. I certainly shouldn't be eating plum clafoutis day after day after day, especially when it's made with double cream. What else could I do with it? A vague memory of a jam setting on my breadmaker popped into my head. Would that solve my problem? Fortunately the recipe was extremely easy: 500 grammes plums, halved, peeled and stoned; a cup and a half of granulated sugar; 2-3 tablespoons of lemon juice; some pectin. I can't remember how much pectin because in the end, despite my OH locating some, I didn't use it. There should be enough naturally occurring pectin in the fruit for the jam to set, I reasoned, happy to agree with several in the online fora.

I don't know if you've ever tried peeling plums. You can't use an ordinary peeler as you would for apples or potatoes. And trying to get the stones out of them wasn't always easy either. I was lucky that the halves were supposed to be chopped roughly before putting in the machine. After that, it was easy enough. Switch it on to the correct program, sit back for a few minutes before sterilising the jars (which in my case involved washing in hot soapy water, rinsing and then baking in the oven, as per the breadmaker's instructions; no boiling jars and fingers for me!). Everything went to plan and I have in fact made a second batch, following the same instructions. The jam hasn't set brilliantly but then we bought some jam in the Azores earlier in the year that wasn't set - still tasted amazing. The second batch is darker in colour as I didn't peel most of the plums, hoping that there will be more pectin in the skin.

But what surprised me most was the reaction from my friends. 'You'll have such fun,' they told me. Really? I haven't had the heart to tell them (until now) that I've done it using a breadmaker in case that has taken the fun out of it all. But having to boil away sticky stuff on the hob, testing the temperature at regular intervals, trying to decant the bubbling gloop from a large saucepan into a small jar without spilling it all over the worktop - I fail to see where the fun is. Perhaps I should have taken greater pleasure from having my fingers stained plum-colour for several days afterwards. Suffice to say, the next jam I make (and yes, there is satisfaction in making one's own jam, especially from produce that was free, rather than buying jars of it from the supermarket) will be done in the breadmaker. And I will have great fun sitting reading a book while it cooks. 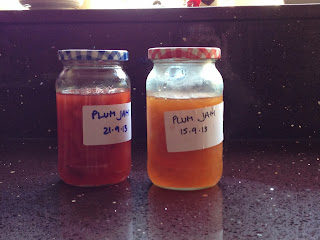 Email ThisBlogThis!Share to TwitterShare to FacebookShare to Pinterest
Labels: jam