The right to freedom of speech of one of those inalienable ones, until someone says something we disagree with, for whatever reason. Americans have it as their First Amendment, for all we seem to hear more about the Second one. The ability to speak one's mind without fear of punishment is something that many of us in the UK and the US take for granted, I suspect. Every now and then there will be a news story from China or similar that makes us draw a sharp breath in shock, though usually this particular right is one we don't even think about. But do we really have that right?

Some censorship may make sense. Child pornography, for example, should be censored out of existence, along with its disseminators. The protection of military secrets rather depends on your view of the need for a military. Other censorship, such as that described as 'political correctness', seems overly nanny-like. And don't get me started on groups such as the American 'Focus on the Family'. 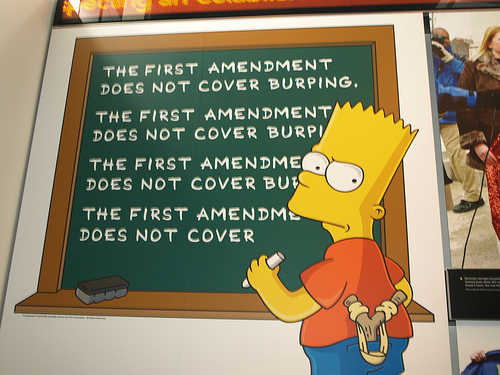 The real trouble with censorship is that half the time, you probably don't know whether what you're seeing/reading/hearing has been censored. I don't mean just the self-censorship, the 'I probably shouldn't say that about my boss because I still need my job' type comments. It's the stuff the government thinks we can't bear to know or won't understand or will misinterpret (thanks for that vote of confidence in our intelligence, by the way). It's the super-injunctions, when various celebrities persuade the courts not only to keep their identities and court-cases secret, but also to keep the secret a secret. It's the decision by someone *higher up* that certain reading matter is subversive and therefore should not be circulated ('higher up' being a relative term here, not a mystical one).

Before the printing press, subversive material was limited in quantity but it didn't stop its existence. Subversion leads to discontent which leads to either rebellion and/or censorship. Socrates was made to drink hemlock because he had promoted philosophies that the ruling class of the day disliked, and that was some considerable time ago. Once Europe got its hands on that movable type, there was no stopping the pesky subversives - so the Catholic Church came up with an Index of Forbidden Books. Pope Alexander VI (the Borgia Pope) had tried to prevent unlicensed books being published back in 1501 but it wasn't until 1559 that the Index was first created, under the auspices of Pope Paul IV, the driving force behind the Roman equivalent of the Spanish Inquisition. (A stubborn man, he only accepted the papacy in 1555 because the Holy Roman Emperor Charles didn't want him to - or so we are told.)  Although the Index was refined later by the Council of Trent, authors could still be put on it simply because their views were deemed 'heretical', even if the subject matter of the book was not. Kepler, Kant and Newton were all forbidden in the Papal States and many Catholic countries courtesy of the Index.

Official censorship via the Index was finally ended in 1966 by Pope Paul VI although the man in charge of the Holy Office (formerly 'The Sacred Congregation of the Index') at the time, one Cardinal Ratzinger, said, "The Index retains its moral force despite its dissolution." Yeah, him.

Michelangelo had no reason to like Paul IV - practically his first act as pope was to cancel Michelangelo's pension - but I suspect his outspoken manner would have also turned him against a man who was keen on censorship to the point of burning offenders at the stake. At least we don't burn people at the stake anymore for abusing their right to a freedom of speech. Or do we?....