I'm just back from a long weekend in Madrid. After the initial metro journey from the airport to the hotel, we resorted to Shanks's Pony for the rest of the trip, even walking back from the concert that finished at 11.45pm. (It was warm, it would only take 40 minutes, why not?)

Madrid is not the largest of cities, but it is a capital, and it does attract tourists. Standing in line for the free entry to the Thyssen Museum, several languages and accents could be heard. So it is perhaps not surprising that they want to keep the city looking good.

How does one achieve that? Sunshine certainly helped, but there were other measures taken by the city council and planners.

Several of the buildings that were undergoing renovation had scaffolding on, but a wraparound facade was then attached so that from a distance, the building looked unaffected. Immediately the city looked neater and less like a building site. 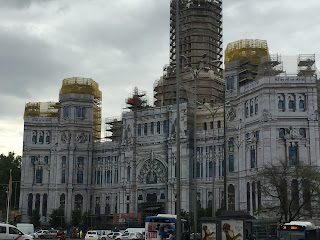 But also, on many of our café stops, we watched council employees in hi-vis jackets working at keeping the city clean and free of litter.

I know that employing such people costs money, but they perform a greater service than simply sweeping the road and/or pavement. They are highly visible, thus providing a deterrent to petty crime, and they know the area, so that tourists can - and do - ask for directions. They are also in a position to report on damage to street signs etc.

I do acknowledge that there are other things councils could be spending money on - filling in the potholes so that the road surfaces are less hazardous for cars and cyclists would be high on the list - but demonstrating a little pride in our surroundings, and making the urban environment better for its users, in addition to provide work for unskilled labourers, has to be worth considering.