Bicester Good Neighbour Scheme, or The Perils of a Coffee-Morning Fundraiser

Bicester Good Neighbour Scheme is a charitable group that matches volunteers with elderly people who feel they would benefit from some home-visiting. You can find out more about them here.

A good friend of ours is one of their volunteers, and we know how much both he and his 'neighbour' get out of the arrangement, so it is a charity we are happy to support. Especially when there is a cake and coffee morning just up the road from us.

We missed the beginning of the event, but it was still crowded when we got there, despite the house concerned being quite large and several rooms given over to the event itself. I tried to get a photo of some of the cake and coffee without including people (I didn't want to have to worry about people's permission for posting photos of them), and this is about the best I could manage. 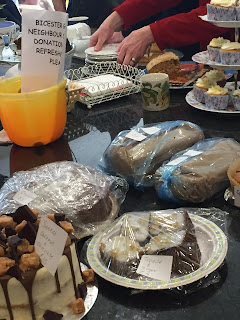 (I'm not noted for my photographic abilities.)

The biggest problem I faced was not acquiring a cup of black coffee, ably made using a machine identical to my own by the host, but in avoiding the cakes. I have decided this week that the few kilos that crept on over Christmas and since are no longer wanted. As the eagle-eyed among you may have noticed, there were cakes for sale, but there were also cakes and biscuits for consuming with the coffee and tea.

However, I really don't want those extra kilos any more, so I managed to resist.

Resist eating, that is. I seem to have come home with a cake.... 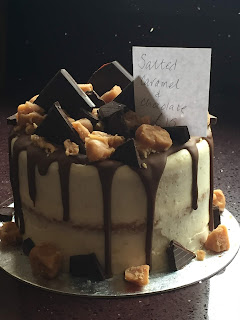 Fortunately for me, it's not gluten-free. Though the fudge around the outside it. I may be recruiting some help.

I console myself with the thought that it's all for a good cause. And a local one, too.