I couldn't face writing about the main stories in the news this week, politician-laden as they are, so I thought I'd write about a higher life-form. 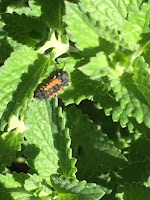 Not the best of photos, but I didn't want to get too close, and there was a certain amount of camera shake.

I was doing some gardening a few days ago (yes, it does happen, if not as frequently as it should) and was pulling out a load of sticky weed, or as I grew up calling it, lady's bedstraw, and noticed a number of these creatures. They looked like a cross between a scorpion and a caterpillar, and being very brightly coloured, I assumed they were toxic.

They are not aliens, contrary to any initial suspicions, but in fact (I believe, after some extensive research on google) are the larvae of the harlequin ladybird, a large and aggressive immigrant version of our own beloved ladybird. The harlequin ladybird, the internet reliably informs me, is larger and more orange than red, with less distinct spots. A little further perusing of the weeds found a couple of these adult versions, doubtless responsible for the outbreak of something that will probably inspire Hollywood and my nightmares.

(Now the etymologists among you entomologists will of course point out that 'alien' is from 'alia' as in other, from another place, so technically they are aliens. They certainly looked it.)

Alien or just aggressive invader, I wasn't having any of it, so some more ruthless weeding took place, in addition to some preemptive pruning wherever the little 'darlings' had settled. I'm sure they will enjoy the warmth of the composting bin. I could only find a couple this morning when I went searching with the camera app switched on, and this one was trying to do a bunk even as I snapped it. 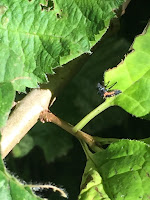 Admittedly, I wasn't wearing my glasses, so it's possible the garden is laden with them. What chance the birds will snap them up as additional delicacies.....
Posted by NikkiF at 01:03